Toby Kebbell in Wrath of the Titans

The 29 year-old has a few to choose from having already worked with directors Woody Allen, Oliver Stone, Guy Richie and Steven Spielberg and alongside heavy-hitting actors such as Michelle Pfeiffer, Scarlett Johansson and Jake Gyllenhaal.

Yet, the names littering a conversation with Kebbell about his rise from high school dropout in regional England to Hollywood feature actor tend to be the less illustrious: a schoolteacher, an acting mentor; his parents, his three brothers and sister and fellow strugglers he bumped into along a career path that now straddles the Atlantic.

While he’s not too coy to recount how he managed to “bullshit” his way through a meeting with Oliver Stone in order to get a part in the film Alexander, he’s just as likely to invoke the name of the kid who got the role of Jesus ahead of him in the school nativity play. (Matthew Walgard, whoever and wherever you are, he hasn’t forgotten or forgiven).

Kebbell still has the swagger, cheek and irreverence of a kid who’s too cool for school, but he’s also the proud owner of a top shelf work ethic that ensured he auditioned “for everything” as an emerging actor and compels him to stay on set for 14 hours a day today to watch how others — ‘greats’ in front and behind the camera — ply their craft.

Make no mistake, in the finest showbiz tradition he is ablaze with ambition and at times, oozes self-confidence, but it’s clearly not only the product of back-slapping sessions with industry heavies or the upside of being a good looking fella.

Ever since defying his parents as a 15 year-old to drop out of school, Kebbell has been on a mission — taking notes and names along the way — to make up for that “nincompoop” decision.

A British theatre and television career and stellar performances in several quality English films put him on a track to redemption and now having established himself as a go-to guy in big budget, blow-stuff-up Hollywood fare such as Prince of Persia, The Sorcerer’s Apprentice and the newly released Wrath of the Titans, you’d think he’d put that moment of teenage rebellion to bed.

But no. Kebbell says he is still “in revenge mode … and really just getting going”.

When Yorkshire-born, Nottinghamshire-raised Kebbell ditched school “way too early” he had a naive but fortunate confidence in his ability to succeed, though the lousy odd jobs he was doing for a quid made him aware of the need to focus – on something.

“My brothers are all talented chaps and doing well, so I was damned if I was going to flop,” he says. “I’d never really stuck with anything but I knew I could act, I knew I could do it.”

Ringing in his ears were the words of a school teacher at the Grove in Newark, Ray Dicks, who, according to Kebbell, told him “this isn’t a piss about. If you want to entertain people then you can do it, you’re an attention seeker.”

He found a way to channel that exhibitionist streak via the Central Television Workshop in Nottingham, a fertile environment for teenage talent overseen by a well-regarded administrator Ian Smith. Trouble was Kebbell’s decision to join the workforce earlier than his peers also undercut his ambition to develop his skill and realise his goals.

“I’m not from a wealthy family so I had to work a great deal,” he says. “So I fell out with Ian Smith and the Central Television Workshop when I couldn’t go down and see a play because I’m working. I was actually pushed out.”

But he stuck to his acting goal, his father’s abhorrence at his decision to go into acting spurring him on. Finally after “pestering everyone” he kicked off a professional career by shooting a domestic violence television campaign for the charity Barnardos: “Me screaming at some poor young girl; Addie Graham”.

Ian Smith from television workshop did not abandon Kebbell and set up a meeting and audition for the young firebrand with influential director Shane Meadows (This is England).

One project with Meadows and his creative partner Paddy Considine fell through, but at the last moment the director contacted Kebbell to see if he could play a bit of a role in his borderline brilliant, thugs and drugs film Dead Man’s Shoes (2004). The actor ended up participating in the entire, often improvised shoot, making his mark as an autistic boy in the intense drama.

“I was lucky from the start,” Kebbell says. “I mean, Shane Meadows – it was just a great opportunity.”

A move to London – he still lives in the East End: “Probably should move out, only because it’s kind of insulting to get out of a nice car (there)” – allowed him to explore theatre and television work while continuing to excel on the big screen.

Kebbell’s stellar performance as Joy Division’s manager Rob Gretton in the Ian Curtis biopic Control (2007) won him a number of best supporting actor gongs and his performance as a crackhead in Guy Richie’s RocknRolla confirmed his rise as a significant force in Britain. 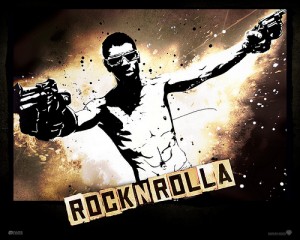 His work on television and theatre helped enhance his reputation and assisted him in meeting one of his major goals of helping pay off his mother’s mortgage. (His parents were divorced when he was a toddler).

Kebbell was ready for the next step, so when he got a chance to head don toga, sandals and sword alongside Jake Gyllenhaal in Mike Newell’s $200 million fantasy epic Prince of Persia, he jumped at it.

“On the page, it looked great,” he says of his character Garsiv. “I thought, ‘I have to do this.’

“But somewhere along the way somebody says ‘yeah, well that’s going to cost money so let’s cut that’ … he was a much richer character on the page.”

Kebbell was stung by the experience: “I had worked so hard, and I think (director) Mike Newell and (producer) Jerry Bruckheimer realised that … but it was a lesson.”

He stayed “great friends” with both men and Bruckenheimer organised an audition for another big-budget fantasy and special effects extravaganza, The Sorcerer’s Apprentice in which Kebbell landed the role as a colorful illusionist.

“This time I just didn’t take it to heart, the whole thing. I just tried to have fun and create a character.

“You know, someone asked me how I’d approach it or something and I said ‘oh I think he should wear heels’ and they were like ‘really?’ so I made up some bullshit story why, and put on some terrible beard so I couldn’t take myself so seriously.”

He brought a similar mindset to Wrath of the Gods although initially he wanted nothing to do with the role of Agenor, the demigod son of Poseidon and the funny cousin and sidekick of Perseus (Sam Worthington): “A moron with a funny voice,” was Kebbell’s first impression of the Agenor character.

“I read it, there was nothing in it,” he says. “I knew what was going to happen: I’m going to meet the director and he’s not going me to want to do anything, he’s going to want me play that one fucking role in that one note. I didn’t want anything to do with that.”

But he met the director, South African Jonathan Liebesman who instead insisted Kebbell impose his ideas on the character: “Basically it was the opposite (of Prince of Persia). It was on the page there, but not here, but I got to do something this time.”

The film has been largely panned, as was its predecessor Clash of the Titans which took nearly $500 million at the box office. Whatever the critical or commercial verdict on Wrath, the characterisation in the sequel is clearly stronger than the first movie.

Kebbell, who has just shot the indie thriller The East with Another Earth writer/actor Brit Marling, Ellen Page (Juno, Inception) & director Zal Batmanglij (Sound of my Voice) sees no conflict between doing ‘edgy’ films and special effects monsters such as Wrath.

“You do edgy stuff to try and get laid,” he says, only half joking. “And it’s certainly not a ‘sell-out’ (to do big budget movies) – you don’t get paid much as a young actor so there’s nothing sell-out about it to be honest.

“You get a lot from every situation. It might not be big coin, but you get a chance to take it all in.”

Unlike many rising stars, Kebbell tends to be direct in discussions about his career: “I should try to be diplomatic,” he says, “I suppose.”

To his credit he seems too focused on fulfilling the commitment he made to himself as a 15 year-old to be overly worried about treading on toes in Hollywood or being perceived to be turning his back on complex films. He may have opted out of school, but he’s been dedicated to educating himself since.

“All I want to do is create memorable characters,” he says. “That’s what I remember from when I was a kid – the big characters. I’ve always wanted to learn how to do that.”

In recent years he’s also worked in relatively minor roles on Spielberg’s War Horse (as the Geordie Soldier) and Robert Redford’s The Conspirator – priceless opportunities to watch as well as act.

“I love being on set, seeing what people do, how it comes out on the monitor,” he says. I feel I’m learning all the time. I wouldn’t want to be anywhere else.”

While lead roles appeal – he recently shone as an Afghanistan vet in the limited release Brit flick, The Veteran – he relishes supporting roles.

“I know good acting,” he says, without a hint of conceit. “A lot of the time you’re actually helping the director get performances (from others). I feel I’m good with that. There is a lot of competition (for lead roles), but few people want to take that step back.”

As he’s made the transition into big budget movies, Kebbell has been bemused, at times, about some of the advice he’s received and the priorities of some around him.

“Someone said, ‘oh you don’t want to give yourself a beard in that role because no-one will see your face.’

“And I’m like, but I’m an actor. Who gives a shit? Why does that matter?

“I mean look at (Ron) Moody (as Fagin) in Oliver! When I was a kid I loved him though you wouldn’t have recognised him on the street. But it doesn’t matter, you just adore him.

“What an imagination to come up with that. And that’s what I’m trying to do with acting:  I’m not doing this to get into a nightclub.”