As a rugby league player, Manfred Moore was a trifle though you could see he was a good athlete.

The uncomfortably seated crowd in the decrepit King George V Memorial Grandstand at Henson Park in 1977 spent much of the game entertaining themselves by chiding the former San Francisco 49ers NFL player: “Not that way Manfred! … That’s called a tackle Manfred” or barking gems such as “Where’s your helmet Manfred?”

The poor bloke stood so far away from the action on the wing he had one foot in Lewisham.

More a cynical promotional trick than a valid experiment, rich scallywag John Singleton brought the former running back to the old Newtown club where he played four rugby league games and usually managed to head towards the correct goal line when asked. Unfortunately he got a kick in the head, nine stitches and the shock of his life having never been injured before, so he packed his bags and headed back to the United States. It left the mob in the stand with little to laugh about as their dreadful team finished stone cold last that year.

Moore was merely a novelty and the idea of transforming American football talent into leagiues was ridiculed and quickly forgotten. But for those, be it in Sydney, Brisbane, New York or Seattle, examining Jarryd Hayne’s decision this week to try his hand at American football, it might be worth remembering Manfred.

Sure, Hayne is headed in the opposite direction and as a performer in elite company is in a different galaxy to Moore who managed only 13 carries other than kick returns in his NFL career, but, in the end, they could have sent Walter Payton to Newtown and he would have been made to look like a klutz at times in his first four games. 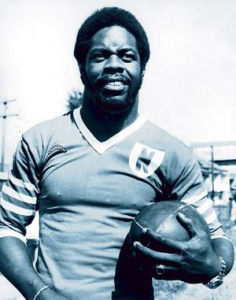 Despite what some Australian media outlets would have you believe, Hayne’s planned defection from league is not big news in the US. However, it’s quirky enough to draw a few trainspotters and many breast beaters to sports sites, no doubt chanting “U-S-A U-S-A” as they put down their guns to type how Hayne hasn’t got the 40 yard zip, the vertical leap, the bulk, or the toughness to play in the NFL.

Of course, that’s rubbish, as are suggestions from league strongholds in parts of Sydney, Brisbane, Wigan and Port Moresby that Hayne will dance through technically inept open field defenders in the NFL (making people miss, as they annoyingly call a sidestep in the US) with an ease that will cement him a spot in the team that won the Super Bowl last season.

It’s not about whether “my sport’s tougher than yours” or even the athleticism of the players — there are scores of world class sportsmen with potential to play any form of football. It’s more about how they master the intricacies of what they do when they are surrounded by others with similar traits that sets them apart. And that — just ask Israel Folau — takes time.

Hayne, at age 26, doesn’t have that luxury so he’s more than a long shot regardless of his potential. For rugby league fans, think of it this way. When Manfred got hold of the ball for Newtown and ran straight he looked OK, but how long would have it taken to teach him to run in support of a ball carrier, pass the ball, learn to unload in the tackle, kick the ball, cover the back three, tackle, be in position to tackle and learn to tolerate getting kicked in the head, sustaining a wound that required nine stitches?

Certainly more than four games which is exactly four more than Hayne is likely to play during his his gridiron foray. Even if he gets a run at practice the learning curve will be beyond prohibitive. As American football pundits like to remind us, their sport is very, very complicated. In fact, neurosurgery is much easier apparently, though the pay is comparatively awful. All those “hut huts” and confusing white board illustrations, and the playbook looks like a 10,000 pages of guitar tabs to most sane people.

Fortunately for Hayne, as expats will tell you, the US workplace loves specialization. You can be working as a baker and there’s a good chance your career goal will be to to obtain the title VP for Kneading, an executive position that will never require you to bake, eat or look at bread. You’ll just have to be the king or queen of squishing it up before the VP of Moving Things takes it in the direction of the ovens.

Similarly, in American football, there are approximately 450 people with an assigned role for each team. And that’s for high school football. That’s why you see small villages on the sidelines of NFL games. It’s been suggested that some of those people never leave.

Amongst all these specialist roles, the best for Hayne, as has been extensively and sensibly suggested since his announcement, is the returner of kicks. It will mean he’ll only have to look up from his playbook study maybe six times a game, trot on, take up a spot on the field equivalent to the fullback position he plays in league and either let the ball go, catch it and take a knee to stop the play (when the big, nasty, unparalleled super athletes are too close) or grab the pill and start running like he does so effectively for Parramatta.

If he gets a chance to do this task which may, at best, amount to a minute of on-the-field action per game, many leagiues would suggest he will quickly become a VP of Kick Returners as well as very bored.

And that’s the irritant. Limiting a guy like Hayne or say, Folau or Greg Inglis to a single, though difficult task, is somewhat akin to restricting Meryl Streep to doing innovative television ads for Woolies (or Coles if they pay her more — maybe they’ll throw in free groceries and delivery). OK, not a good analogy; point is, it’s a waste.

Now, swaggering NFL types will tell you if he’s good enough and learns the game fast enough, he’ll get a chance, which for the most part is hoo-harr as America’s solipsistic sports culture tends to think the world ends a few miles off Florida. Nevertheless, they do value excellence, so in the unlikely event he gets a chance to catch a ball and run with it on an NFL field, who knows.

Thus, what does Hayne, clearly a very motivated individual, have to adapt to/perfect/practise in addition to learning all those guitar tabs and honing his ability to trash talk?

— The Footy Gear. Yes, it’s a little over the top. It’s believed NFL players usually have about six hours between undressing after a game and dressing for the next week’s fixture; it takes that long to put on all those pads, pairs of socks, many penis protectors, and helmets. Hayne would do well to wear a kit around the house in order to get used to it, even slipping on the boots when he pops out to the Minto shops for something. When he leaves Australia, his agent should have him wearing the kit as he hops on the flight as a sign he’s determined to get used to it. Getting through security might take a while, but making it day wear is what he’ll have to do adapt to that extra weight and limited vision thanks to the helmet. Remember, he’ll be looking up into the snow for that smaller-than-a-rugby-ball, ball that has possibly just been kicked by some old Aussie rules hack now making a million a year.

— Ball Protection. When he takes his spot on the Qantas Jetliner he should be holding an American football. In fact, he should sleep with it. It needs to be lodged, at all times, in a 30 degree slot between his bicep, forearm and ribs, preferably with his free hand pressing down on top of it as if he’s keeping the lid on a basket containing snakes. Possession in American football is more than half the game. That’s why they’re too afraid to pass it more than once, even when a bloke is a shoo in to score if only the player next to him had the ability to pass it more than a few feet without looking like your toddler sister throwing a beach ball. Stripping the ball is the second thing on a tackler’s mind. The first is to hospitalize you. If he manages to dislodge it, the coach will probably send you to the emergency room anyway. With this in mind Hayne should vow not to attempt to palm (fend) off (stiff arm in NFL parlance) anyone for four years. Just as Irish dancers never let their arms leave their side, the novice kick returner should set his arms in place over the ball and never move them — he should smother that pill like he’s picked up a bomb and he’s running off to absorb the blast for his unit. You understand Jarryd? This is very important, deserving of several more mixed metaphors for emphasis.

— Avoiding Very Large People. As a kick returner, Hayne won’t be immediately confronted by those huge fat fellas from the scrimmage line, but there are a lot of other very fast big people playing NFL and because this is the only ten seconds they have to show the coach they’re worth at least 20 seconds of game time, they are out to monster the opposition in a truly dreadful way. Hayne will have to learn patience. Taking a knee or calling a mark to kill the play is a very un-rugby league thing to do, but it’s one of many annoying common sense, slow-down-the-game ploys in the American football. If, however, space presents itself and Jarryd has his own large people forming a battering ram ahead, light it up with that lovely step and swerve brother and if you get passed the big blokes, run straight at the kicker, because if he’s learned to tackle in Aussie rules we know how that’s going to turn out.

If Hayne does get a crack, down the track, at doing something more than sitting on the sidelines and freezing to death (that’s 10 degrees fahrenheit not celsius Jarryd. It isn’t just Ugh boot and trakkie dacks weather, mate), let’s hope he’s not wasted on the defensive side of the team. Those guys are great athletes too, and Hayne as a league player is a solid defender, but it would be like only getting to see Meryl Streep on stage. I know, enough with the Meryl Streeps, but face it, she does her best work on the big screen.

Forget all this drivel about the US producing thousands of 6ft 2inch 220lb, ‘Jarryd Haynes’ who never get a sniff of the NFL.

Utter rot. They produce a lot of fine 6ft 2in, 220lb athletes and some of the very best of them are not unlike Manfred Moore.

Haynes is special and you’re getting a gift Yank cousins. Your obscenely wealthy and competitive game may be stuffed with extravagant talents making it hard to discern what is truly valuable, but don’t overlook an unpolished foreign gem.

Yes, we all know it’s a long shot. Hell, the guy hasn’t even got a club to go to. At least Manfred got a run with Newtown. Indeed, Hayne will be doing wonderfully to achieve what Moore managed to do 37 years ago.

Before heading back to finish his NFL career as a kick returner, Moore, went into the record books as Newtown’s first try scorer in the 1977 season.

Imagine if Hayne got four games and a touchdown during his great big US adventure?

Better than a kick in the head.

Give him the ball Americans. Give the Australian the ball and watch him run.