On the shonky stages of inner Sydney and Melbourne venues in the 1980s, I harbored a quiet confidence that, despite the mullet and my habitually poor choice of clothing, I would eventually find a niche in the music world. Sure, the stony silence that greeted the end of many of my band’s performances was a little unnerving, but the physical beatings were merely sporadic.

Yes, I would tell myself as I slinked off the ‘stage’ at the Sussex Hotel avoiding the gazes of (depending on which band we’d just supported) snarling disaffected youths or poncy rhythm-less geese with peacock hair, my voice will one day reverberate around some of the nation’s biggest venues.

Decades or maybe it is a thousand years later my singing voice indeed, on occasion, can be heard in concert halls in Sydney & Melbourne and as far afield as New York, Hong Kong, London, Singapore and Dubai.

That is, of course, unless you happen to think, for example, the “Yummy Yummy Yummy Yummy Fruit Salad” line or the high pitched screech in Dorothy, Would You Like to Dance With Me? is the height of pop-cool, creative genius.

Yes, I am a backing singer for the Wiggles.

“Cool,” you might think, if you’re drunk as you read this. But I’m afraid I can’t even claim I got that gig purely on merit. See, I’m related to the creator of the band, Anthony Field. So it just could have been my cousin, who was very fond of my mother, being nice to me.

“Let’s get Greg to sing that yummy yummy line,” Field might have gently pleaded with the other soon-to-be fabulously successful and wealthy Wiggles, “the poor guy hasn’t had a good gig in years. You remember that awful night years ago at the Sussex Hotel – was he playing punk or dance music?”

Anyway, I’m glad he did. It solidified a relationship that has allowed me to watch from close proximity for more than 20 years as the Wiggles revolutionized children’s entertainment.

Although I moved to New York from Sydney in 1994, mainly to advance a career in journalism, I’ve maintained a professional relationship with the Wiggles since warbling on those early recordings.

Unfortunately they rejected my plan to become the Black Wiggle, (‘Hard livin’ and lovin’ it’), but I was a frequent contributor as a scriptwriter on a bunch of long-form projects.

Quite a while back, I suggested to Anthony that the Wiggles, who evolved into the globe’s biggest musical group for preschoolers, were worthy of a biography. Having seen their honorable struggle to always maintain control of what they do in a beast of an industry, I wanted to document why, how and who was involved in their astonishing success.

We kicked that around for about six years; drafts were written, publication plans put in place, but it didn’t seem right. A bio hints you’re drawing to the end of a career and that’s never really been on the Wiggles’ radar.

About five years ago when Greg Page became sick and had to step away from his duties as the ‘Yellow Wiggle’ it all got too hard and the manuscript got shoved in a dusty draw somewhere.

But around that time, as Pagey struggled with orthostatic intolerance, I was very aware that Anthony was at an important stage in his own health journey.

Few people knew, but he had overcome a long list of serious, even life-threatening ailments, illnesses and injuries and was on the road, not only to recovery but completely transforming himself.

While he did the hard yakka to become fitter and healthier than he’d ever been, it was with the guidance of two chiropractors, using truly innovative approaches that helped him turn his life around.

In itself, that was a story worth telling, but as we did the research it also became clear the methods used by Dr James Stoxen and Dr Richard Gringeri had the potential to help literally millions, especially those with chronic pain. What’s more, very few people knew about the treatment and training these chiropractors offered.

So we hatched a plan to write about Anthony, the musical group he created and his health struggles and triumphs.

How I Got My Wiggle Back will be released in North America and Australia in the coming month.

The book tells the Wiggles’ story: how they effectively became, in my opinion, one of the world’s great independent entertainment operations, doing what they do for the right reasons and sticking to their guns for more than 20 years in a business that devours content and people at an alarming rate.

It’s also a biography of a fine fella and life-long friend who has a unique vision and ability in his chosen field.

But even if you don’t know a Wiggle from a gnat, I humbly suggest this is worth a look if you have an interest in overhauling your own health or that of any member of your family.

If chronic pain, digestive issues, depression or chronic fatigue symptoms feature somewhere in your life, here’s a number of rigorous, non-fad, non-drug approaches that you probably haven’t seen or heard of before, but are embedded in science.

OK, so enough of the hard sell.

Anthony will be popping up all over the place promoting the thing in coming weeks and occasionally I’ll be with him (I’m the good looking one).

If you see us, please say hi, and, yes, I’ll be taking requests. 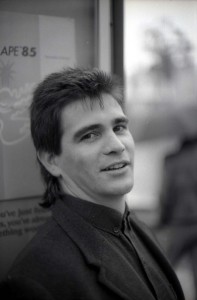 Give me back my mullet

13 thoughts on “How He Got His Wiggle Back”